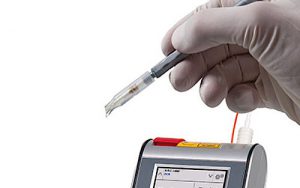 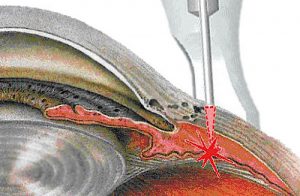 In a cyclophotocoagulation procedure, a laser beam causes the so-called ciliary body, which produces fluid in the eye, to atrophy. This reduces the production of eye water and results in a reduction in intraocular pressure.

The procedure takes place under local anaesthetic by simply placing the laser probe on the eye. Per operation, several laser effects are applied. The laser beam then passes through the closed eye wall to its target location, the ciliary body. The operation lasts for a few minutes and is used for patients with glaucoma.

After the laser surgery, a scar must initially be formed in the ciliary body. In most cases, scar formation is completed after 6 to 8 weeks. The successfulness of the surgery can usually only be assessed 2-3 months after the operation is complete.

If the intraocular pressure is still too high after the first cyclophotocoagulation, the operation can be carried out again.

This procedure is used in cases of neovascular glaucoma, when appropriate in cases of inflammatory glaucoma, in cases of secondary glaucoma after injury and for forms of glaucoma where no other operation has been successful and the intraocular pressure must be reduced.